A Day with the Fireman

Yesterday we set out for a day of shopping at the shops in Port A. I wanted to go there to look for an ankle bracelet like the one I had and broke. But, first we needed to go over to Goose Island and return a dish to Sandra. While we were there, we told Gordon we had seen a grass fire down by the bridge. He grabbed his camera and three guys went back, but it was almost out. 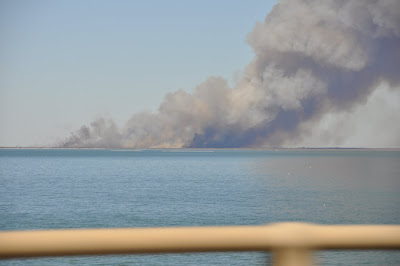 When they returned to the trailer, we decided we had better get on with our shopping spree. We arrived at the shop where I had purchased my bracelet last April, but they didn't have anything I really liked this time. But, while we were there I did my Valentine shopping for all of the grand kids. Ellie found some things to send to their grandchildren as well and she even found a few T Shirts for herself and Jim. Afterwards, we headed on down the island and back into Corpus to locate the World Market. There Ellie stocked up on the caramel syrup she likes for her coffee.
After we left there, we decided we would drive down Shoreline on the way back to the RV Park. We saw where the replica of Nina was docked. It is just here on display. I can't imagine traveling across the ocean blue in a little boat like this. 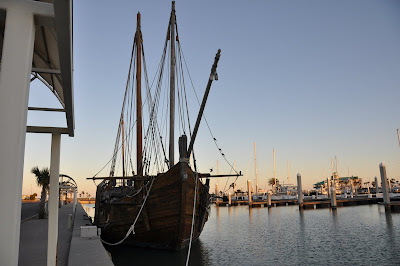 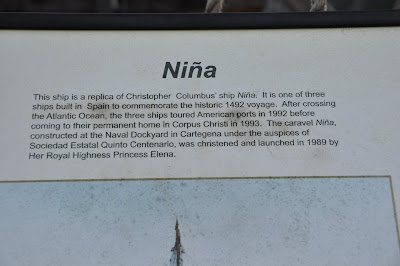 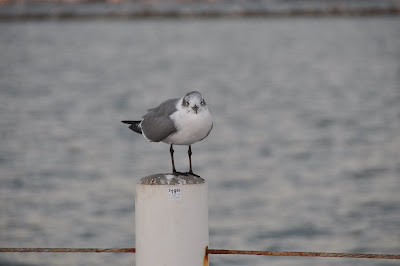 When we left the harbor, we headed back over the bridge, into Portland, and out the 35 bypass when we saw a large grass fire ahead of us. We decided to see if we could get a little closer for a few photos. 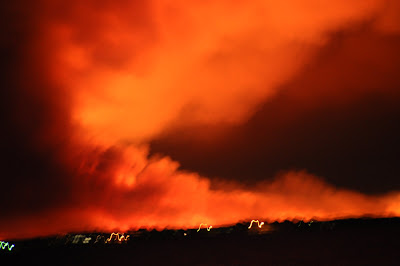 We did find a spot, but no really good pictures, but you get the idea. We later learned that the fire was a controlled burn at the Wildlife Refuge.
Today, we had a catch up day. Mark, Ellie, and Jim got in their two mile walk early. Mark and I then went into town to the laundry. While I was at the laundry, he went to wash the car, get gas, and do a couple of errands. When we got back to the RV park, Jim had gone to make a Walmart run. Today was my day for cooking, so I started a big pot of vegetable beef soup. I made a crust less pumpkin pie and Ellie was going to make cornbread.
After I got the soup done and the pie out of the oven, we decided to take a little ride out to a kennel Ellie wanted to check out. Then we drove down by the water to see if we could see a few birds...no luck. On the way home we stopped in at HEB for a few items including some Vanilla Caramel Swirl ice cream to have with our pumpkin pie! Needless to say, dinner was yummy.
Afterwards, Ellie washed the dishes, I dried and put everything away and then she and I made a quick two laps around the park before it got too dark.
Tomorrow Ellie and I will go to our weekly Weight Watchers meeting and the guys have a few blue jobs to do around the motor homes. Stayed tuned to see how those turn out!
Posted by Mark and Dortha at 5:22 PM