A Rain and Shine Weekend…

Saturday morning we woke to the pitter pat of rain on the roof.  It continued to rain on and off until early afternoon.  Mark wanted to go to the outlet mall, but by that time I really didn’t want to do anything.  So, for the most part we just hung out in the motor home watching football and surfing the web looking for a future travel plan.

Later in the afternoon I got around to making a Dutch Apple Pie for after dinner, which was being prepared by Deb.  She was making shrimp and grits.  Wow, were they awesome.  We gathered at Jim and Ellie’s to eat.  Ellie made an apple coleslaw that was really good and was a great compliment to the main dish.  After dinner, we watched a little more football before saying good night.

This morning we woke to what promised to be a beautiful day.  Mark and I were the only ones that had a day trip in mind, so we headed out early.  After I checked in at the local Weight Watchers center, we made a stop at 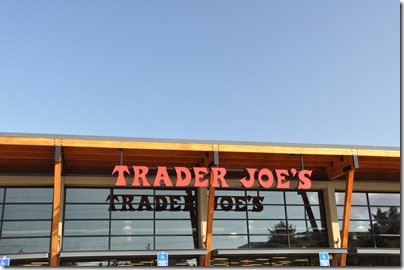 Trader Joe’s.  This a grocery store that carries a lot of organic items.  Ellie and Jim introduced us to several of their products which I really like.  This is the first store I have been to.  Since they are not located everywhere,  I stocked up on trail bars and salsa.  Boy, isn’t that a combination. LOL

We were then off to Hood River which is a small town East of Portland on the Columbia River.  Mark’s parent’s lived there for awhile in 1946 and he wanted to see it.  On the way there, we stopped 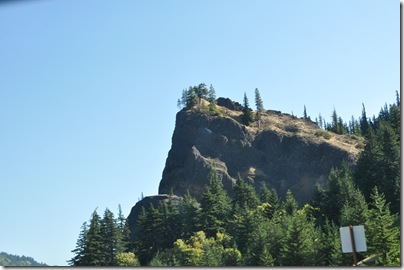 at Mitchell Point Lookout for a great view of 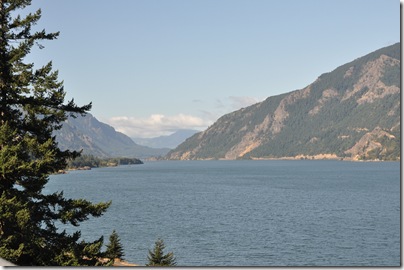 the Columbia River Gorge.  Then, it was on to 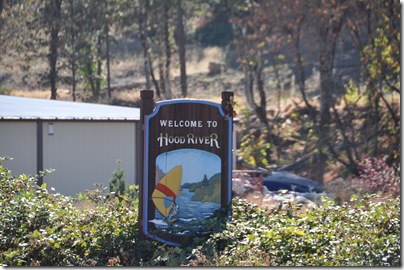 Hood River.  Even though this town is small and basically has only 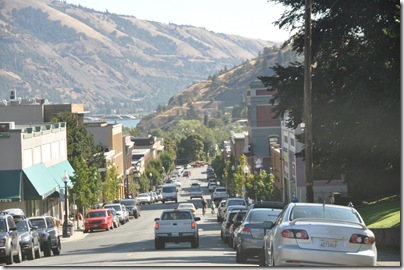 one main road that runs through it, we found it was busy.  We walked the streets and shopped in the stores. 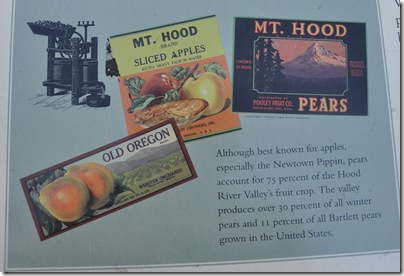 With this in mind, we ventured on down the road to one of the 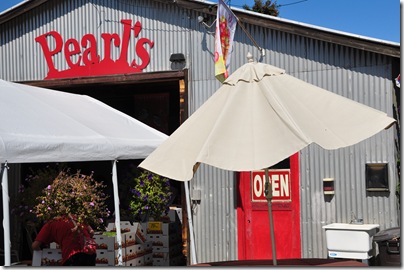 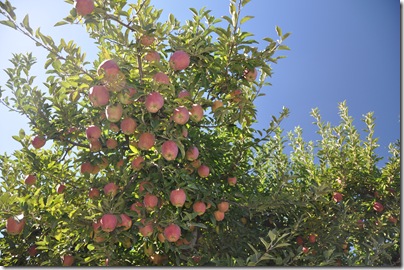 grow the apples and 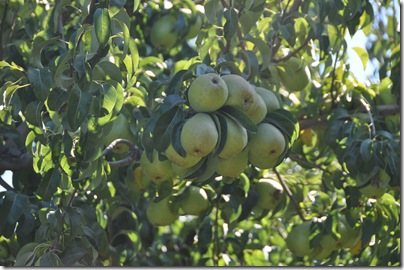 pears.  When they are harvested, they 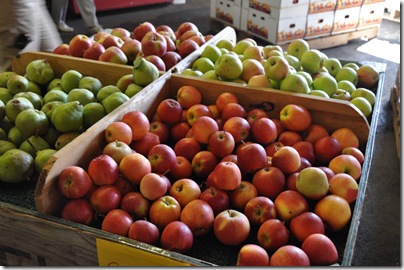 put them out for sale.  As you can see, 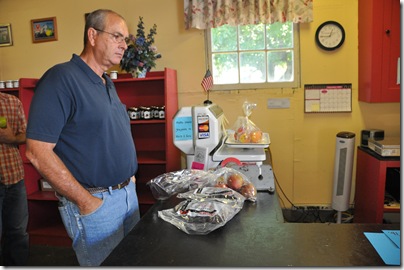 we didn’t have any problem finding apples, pears, peaches, blackberries and Marion berries to take with us.

This is one of the many stops along what is called the “Fruit Loop”. 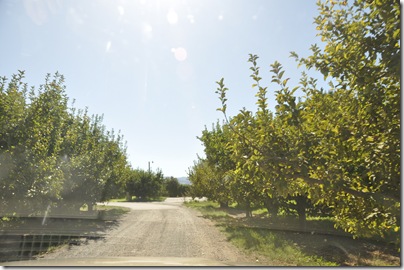 out through the orchards it was way past noon and we were getting hungry.  We decided to look for a place that we had seen advertised on Food TV called 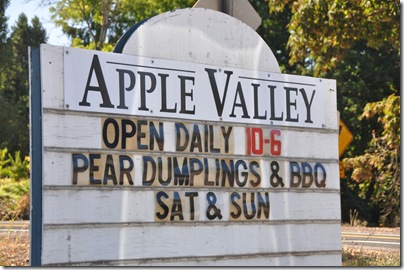 Apple Valley.  When we got there, we found out that this was a special festival weekend and they were 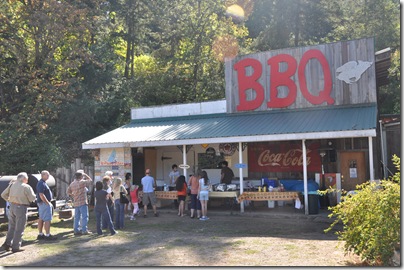 serving barbeque sandwiches which included cider baked beans and pear coleslaw.  Wow, was it good…I am glad I weighed in at Weight Watchers before coming here.  After enjoying our lunch which also 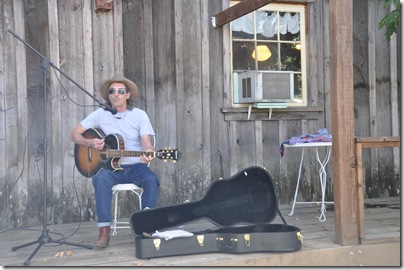 came with a little country and western music, we went 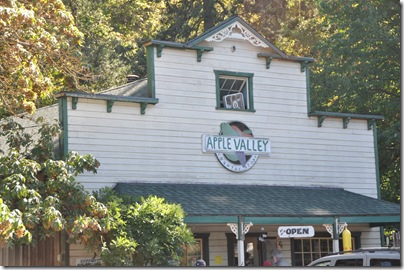 into the bakery and found all sorts of pastries, jams, and jellies.

From here we were off to 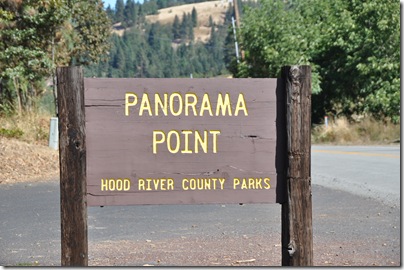 this lookout area where you could 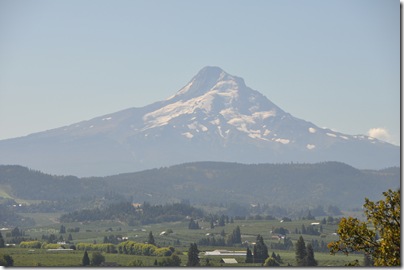 Mt. Hood standing majestically over the valley filled with orchards and vineyards.  We wanted to get a closer look at the mountain.  But, to do so, we had 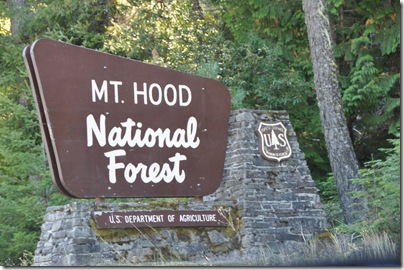 travel through the forest and up to 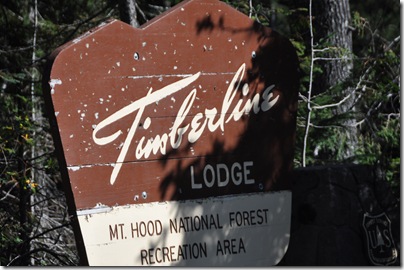 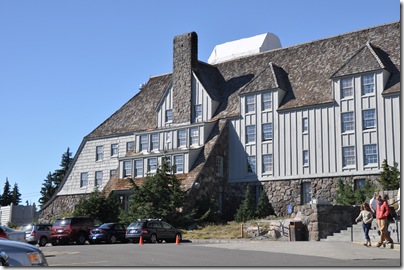 the ski area at Timberline.  Here we were 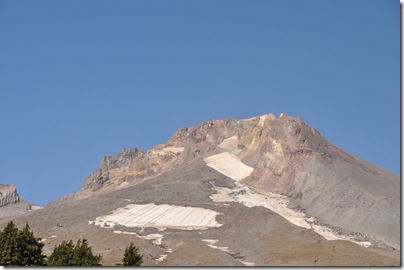 almost at the top of the mountain.  From outside the front door of the lodge, you could also see 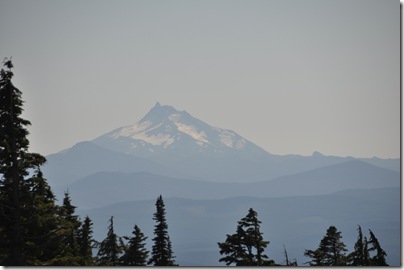 On the way down the mountain, we 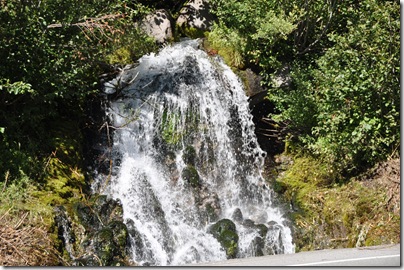 saw this pretty little waterfall coming right out of the rocks beside the road.

All too soon this day came to a close, but what a fun day it was!