The Weekend and A Labor Day Get Together

Wow…what happened to the weekend.  Seems like the last thing I remember was coming home on the ferry from Seattle.

Sometime during the night on Friday it started raining and was still raining when we got up on Saturday.  We got a slow start to the day.  I finally got around to doing a couple loads of laundry and did a little cleaning around the motor home and made an apple cake.  Later in the afternoon Rod and Deb came over from Port Angeles to have dinner with us.  Jim had been wanting to make a pot of Jambalaya and this was the day.  We had a fun time visiting, eating, and watching football.

Pretty much the same thing on Saturday night.  The rain was back and still raining on Sunday morning. After lunch, Mark had enough of sitting around so we decided to go to Poulsbo to Central Market.  We wanted to see if it was like the one in Texas.  They have such great produce and fresh meats.  We also wanted to see if they had the same coffee beans we buy in Texas.  While we were there, the rain came down in sheets and kept coming.  By the time it let up, we had had a chance to look at and touch everything the market had to offer.  So, how could we need anything else?  Well, we did, because we left Central Market and headed straight for Wal-Mart. LOL

We made it back from Poulsbo, put the groceries away and then made a trip to the local grocery where Jim needed to exchange some coffee beans he had purchased by mistake.  Seems he had picked up decaf instead of the regular.  So we drove into town to make the exchange.

Yesterday, we also had lunch at the Chimacum Cafe.  This is a little small cafe that always has cars around it.  The food was wonderful, but the pies were awesome.  I am glad we only tried it yesterday and we are leaving tomorrow.  This place could be dangerous.  And, let me just tell you there was not much on the menu that was point friendly!

Wow, this has been a day of grocery shopping and eating.

Sunday night came and so did the on and off rain.  However, it was just on and off drizzle by this morning.  That was a good thing because we all needed to get a lot accomplished today in order to be ready to travel tomorrow.  We got most of it done by the time Rod and Deb made it over for a Labor Day get together with us here at the park. 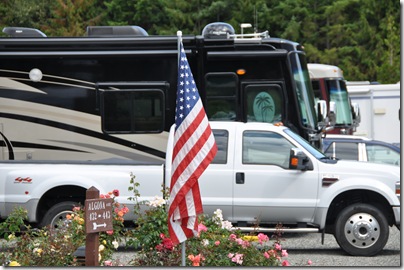 flags flying throughout the park.  This afternoon the park hosted a hamburger feast with all the trimmings.

It was held at the 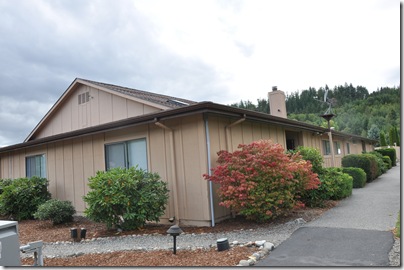 clubhouse.  It was quite a success as evidenced by the 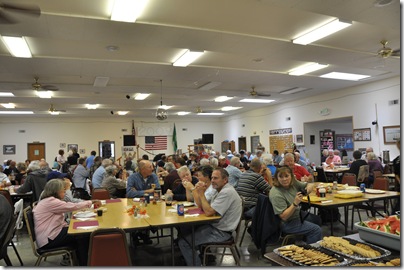 crowd that showed up.  They had every thing set up so all we had to do was work our way 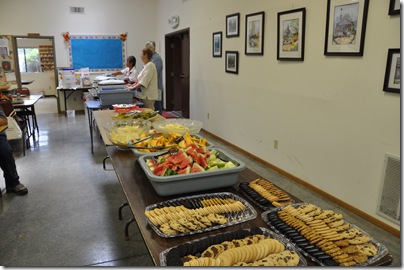 down the line building your hamburger along the way. 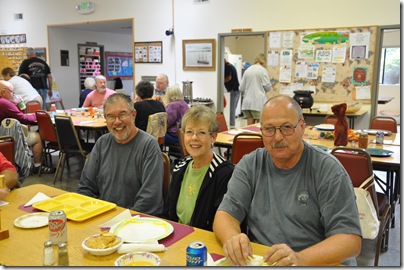 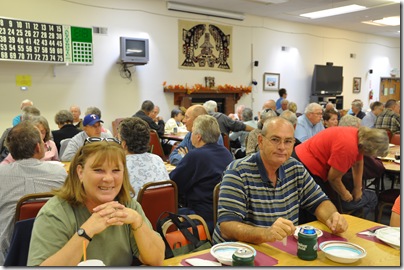 After lunch we went back to the motor home and discussed our plans for travel tomorrow.  We are so excited that Rod and Deb have decided to join us as we travel down the Washington and Oregon coastline.

Deb called several of the RV parks where we had already reserved and got sites for she and Rod.  We discussed several other stops.  We then told them about the Chimacum Cafe and the pies.  We decided they needed to make up their own mind about how good they were, so off we went for pie and coffee.  It was soooo yummy that Rod and Mark decided they needed an extra piece to bring home. LOL

Soon it was time for Rod and Deb to head back to Port Angeles and we needed to get back to the RV Park to finish packing for tomorrow.

Our destination tomorrow is only 98 miles over to Forks, Washington.  We will be there for two nights.  While there we plan to made a trip into the Hoh Rain Forest and a trip out to the beach. 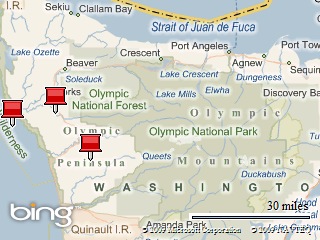 See you from the other side of Olympic National Park!